Sand painting at the Qatar Investment Forum in Berlin 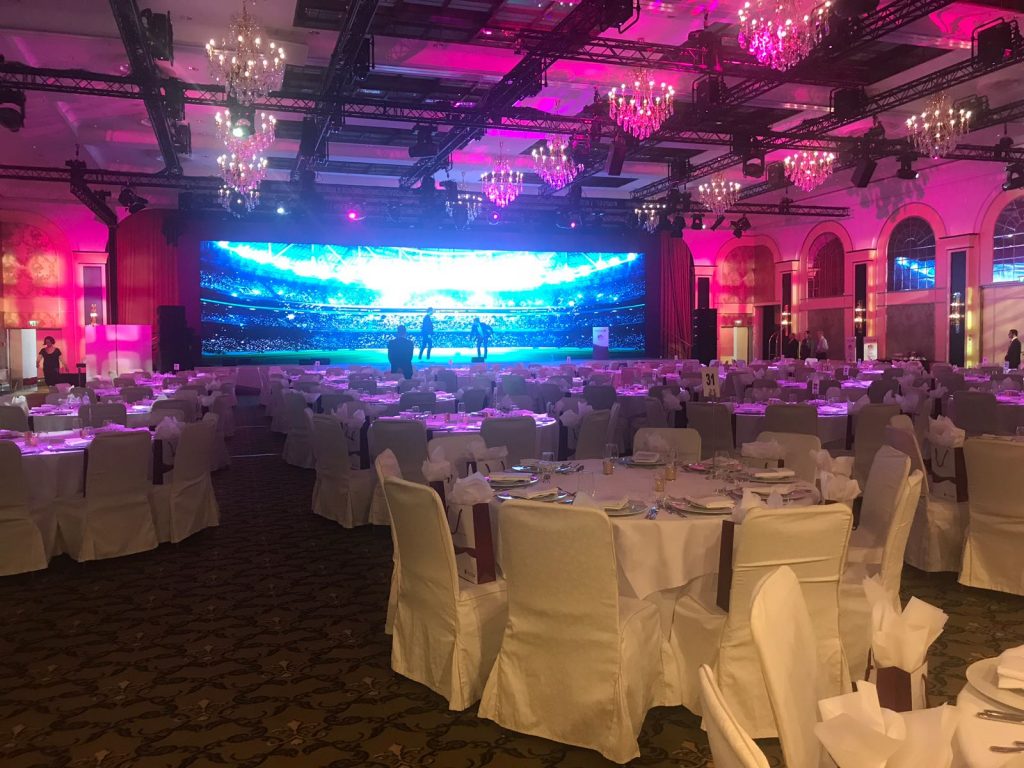 In September 2018 we were part of a very special event: The Qatar Germany Business and Investment Forum in Berlin. Not only did we attend the presentation of the projects and the exciting debates of the guests, but we even had the opportunity to organize the supporting program!

The supporting program of the Qatar Investment Forum was marked by the Qatar desert. When we were asked whether we could offer the guests an extraordinary sand spectacle, we accepted the invitation with enthusiasm. The preparation began; we developed the storyboard, the music was chosen, the first scenes were painted in sand, and of course, the suitable dress had to be chosen! 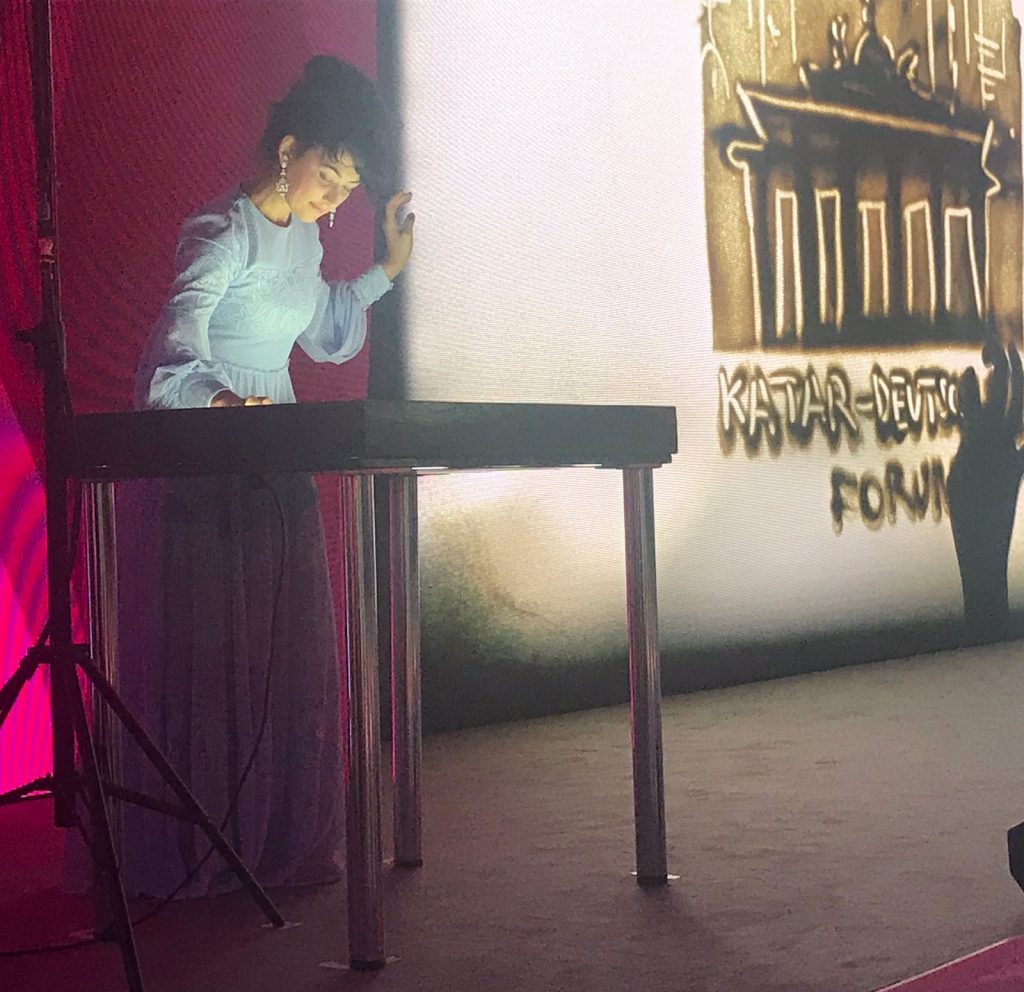 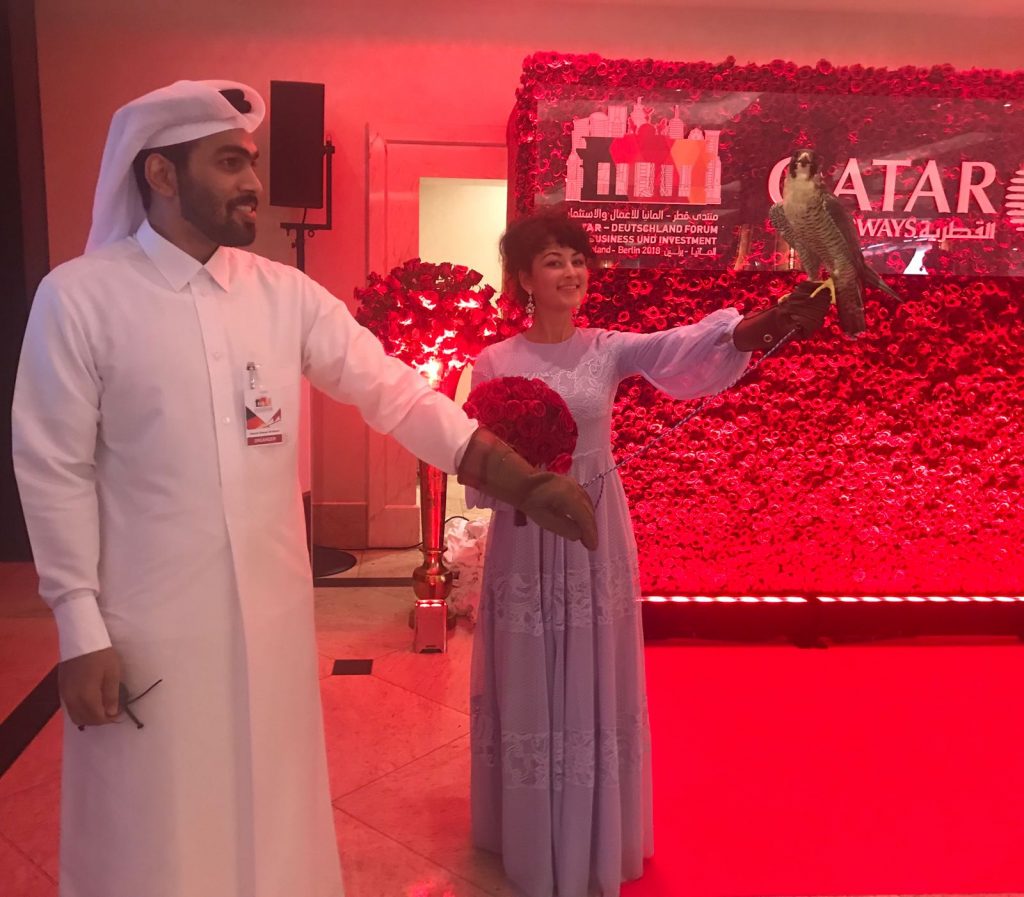 The day finally arrived. The forum began promising: The Emir of Qatar and our Chancellor greeted the large number of guests. The hall was splendidly decorated, the festively laid table and the beautiful chandeliers created a special atmosphere to the event. The atmosphere was fantastic. The guests were in a good mood, they laughed and they enjoyed themselves. When the Football World Cup 2022 was mentioned, the enthusiasm was even greater. We were also excited and we couldn’t wait for our performance to begin.

The time had come, and our sand artist appeared on stage in a beautiful light blue dress. The fantastic atmosphere and the expectant guests put a smile on her face. She began to reproduce the origins of the cities in Qatar, whereby she used fine sand straight from the Qatar desert. The guests watched her with delight as she painted imposing and modern buildings above the magical desert. With light hands, she brought lively cities to life. When the first silhouettes of the Football World Cup logo became visible, there was growing excitement, and there was electricity in the air.

Accompanied with mystical sounds, the journey continued. Our artist drew a Qatar Airways plane which took off at the beating of drums and took the spectators to Berlin where the cooperation of the two states was sealed. As the last drum beating faded and the sand spectacle came to an end, the audience appreciated the show with thunderous applause. Our artist was completely overwhelmed by the long applause, and she bowed to the audience with a radiant smile.

As such, the day was not only a success for the guests but also for us. After the performance we were overwhelmed with compliments and we received beautiful bouquets of flowers. We will remember this special performance for a very long time!+-

NextWithout exaggerating, sand painting is the trend of the year 2019Next

Menu
I want it

This website uses cookies to improve your experience while you navigate through the website. Out of these, the cookies that are categorized as necessary are stored on your browser as they are essential for the working of basic functionalities of the website. We also use third-party cookies that help us analyze and understand how you use this website. These cookies will be stored in your browser only with your consent. You also have the option to opt-out of these cookies. But opting out of some of these cookies may affect your browsing experience.
Necessary Always Enabled

Any cookies that may not be particularly necessary for the website to function and is used specifically to collect user personal data via analytics, ads, other embedded contents are termed as non-necessary cookies. It is mandatory to procure user consent prior to running these cookies on your website.